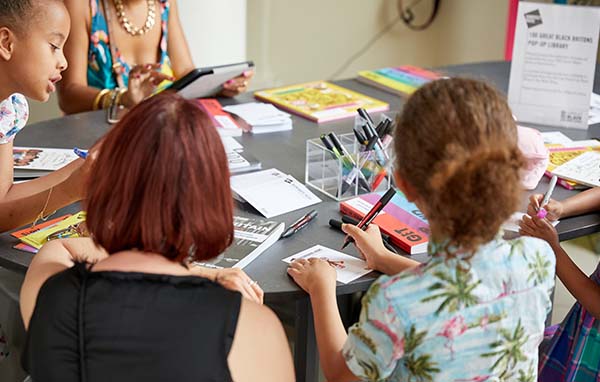 Looking for a fun and educational activity to do with your children at home? This competition is for you! And we have amazing prizes for you to win! The competition will be open to all subject areas covering the national curriculum. It’s a fun and engaging way to teach children at home about Black British History and how it helped shape our country.

Alone or in a group, they need to create a unique and exciting way to celebrate Great Black Britons. Parents, families, and young people can get involved in the competition and share their ideas, their knowledge and be creative!

"In line with the current momentum to include Black History as an integral part of the National Curriculum in schools throughout the UK, the 100 Great Black Britons Competition provides an excellent opportunity to broaden the horizon of young minds whilst having fun."
Joy Sigaud, Editor, EDITIONS LIFESTYLE Black History Month Magazine

Parents or guardians of Pre-School children who want to enter the competition can upload a picture of their children dressed up as their black heroes or a drawing that their children have done, representing their favourite Black Britons.

Prizes will include a voucher for participants and books and learning materials with a monetary value of £50, that will go to the nursery of their choice.

We want you to use the resources below and look at the biographies of the Great Black Britons nominated on www.100greatblackbritons.com You can choose one or several Great Black Britons. You then need to create a unique and innovative project to celebrate their work and legacy. This could be:


The winning projects will be the ones that are the most innovative and that clearly show why the chosen Great Black Britons were important.

All projects must focus on one or more Great Black Britons featured on the website, or nominees that the campaign should have considered since 2004. Judges will need to see your work so don’t forget to send a picture or a video of your project!

Prizes will include a voucher for the winners and black/multicultural educational resources (books, games, software packages) will be awarded in the following categories to the school of their choice with, the following monetary value:

For the Young Peoples competition, we are looking for an exciting and insightful essay, podcast or videos on Black British identity and heritage. We are looking for individuals to write an essay (up to 1000 words or to create a podcast, videos (up to 10 minutes), based on one or more of the following competition themes.

Racing Green Pictures is to sponsor the 100 Great Black Britons Young People 16-25-year-old category and donate the winning prizes of laptops, school vouchers and books to the winners and runners up. Prizes will be awarded in the following categories to the school of their choice with, the following monetary value:

The top prize will be an exciting opportunity for the winners to visit the ‘Seacole’ film set, the edit suite and to meet members of the cast.

Racing Green Pictures is an independent, international studio based in London, UK. Founded in 2019 by Billy Peterson, RGP’s vision is acutely focused on projects that transcend the concept of content as only entertainment through untold stories of cultural and social importance can do.

Billy Peterson is the CEO of Racing Green Pictures. He previously founded the Epic Match companies in 2011 and has independently produced several feature documentaries and films. Prior to founding his own company, Billy worked with several International NGOs where he focused on development and transatlantic partnerships between public and private entities. In addition, Billy is involved with several philanthropic organizations where he serves as a board member.

“I am thrilled that the 100 Black Britons is finally released, and that Mary Seacole is No. 1.The story of her life, ‘Seacole’ is a true, socially impactful, humanitarian film about a strong woman of colour persevering against all odds is exactly what today’s audiences are thirsting for. Racing Green plans to invite the winners of the competition to the film set so they can learn through experience how her story will be told. Filming on location is one the best forms of education one can get in moviemaking and I’m excited at the prospect of hosting the winners of this great contest created by Patrick.”
Billy Peterson, CEO Racing Green Pictures

Winners will be notified in February 2021 and featured on the website and the results 100 Great Black Britons.